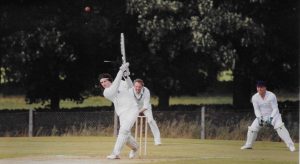 COBOL was a revelation. It was horse drawn carriage to motor car, Betamax to VHS, black and white to colour. After the relatively slow and long-winded Assembler, I could churn out COBOL code four or five times quicker. It was easier to write, less prone to coding errors, apart from the nightmarish, rogue full stop that could take days to detect, and it consigned Assembler to history. Although Assembler was prevalent throughout the brewery data processing systems, I restricted my involvement with it to tweaks and bug fixes. Wherever possible I rewrote in COBOL – it was that much simpler. A program to deal with the various rents that the brewery collected was a challenge, as these ranged from thousands per month on the biggest pubs, to literally pennies for wall-based advertising and the ‘right to light’ on some of the properties. I often wondered, what is the point? However, if the brewery failed to collect the odd penny here and there, they would forever lose their right to do so.

Elsewhere, the secretarial arm of the company received their first word processors, based on Wordstar. Many were reluctant to give up their trusty old typewriters, but with some persuasion, and with a lot of ‘turning off and on again’, they eventually switched to the new technology.

The brewing part of the business also embraced the new, replacing their old copper brewing vessel with a brand new stainless steel one (still called a ‘copper’), and it came complete with its own software to control the brewing process and the cleaning cycle. At that time, every brewery worker (not office staff) was allowed four free pints per day. This was supposed to be Mild, but there was a bit of leeway! That might seem irrelevant now, but bear with me. The new copper brewed more beer than ever before, but the automated cleaning cycle was not quite up to the task. Some of the darker brews were not so easy to clean, and there was frequently a stain of uncleansed liquor around the top of the huge vessel. Normally, they would have contacted the vendors, but they had gone bust. We had a manual, a schematic diagram, and a panel of lights.

I figured out that the first thing we needed was a PLC, or programmable logic controller, to change part of the logic. Although the parent company had gone to the wall, parts were still available, so I ordered one of these and prepared to get stuck in. I thought it would be a good idea to see the beast in action, to monitor the activity on the panel of lights on the wall of the copper room. So, I made enquiries with the operators as to when I could watch. Unfortunately, the only time they could get enough pressure on a non-brewing day was at 4 o’clock on Friday mornings. At the time, I lived about ten miles from the brewery, and I didn’t drive. I relied upon public transport (with the occasional cycle which was hazardous after a long day at the office and a few hours in the pub), but at 4am there was nothing. One of the guys offered to pick me up, but he gave me a cautionary warning. ‘We can’t get in the cellar until 6am, so you will have to bring some cans in until we can get the keys. I usually bring in four cans of Guinness.’ As previously explained, I was not averse to the odd drink or two, but 4am at the start of my working day seemed a bridge too far, so I politely declined. It is no surprise that within the decade and more that I was at the brewery, I encountered many alcoholics, including one guy who quite literally brushed his teeth with vodka!

Anyway, the big day came, and I stood watching the lights for a couple of hours. Valve open, pump starts, pump stops, valve closes, heater starts, brushes start, brushes stop, heater stops, drain open, rinse starts, rinse stops. That was about it, though with a few added complexities. The answer was simple. Up to that point, one of the guys had been climbing in to the copper with a long brush to give it a final scrub after every cleaning cycle. I needed to extend the cycle. This was basic step ladder logic, with one event following the next, and with a timer applied to anything that was not just the flick of a switch. I downloaded the current program into the PLC, made the changes, uploaded it back into the hardware and watched the next cycle. Perfect! No more stains, and no more chap with a long brush.

This new skill had another advantage, in that the schematic diagram was on the wall of the engineer’s shop. The diagram also contained a copy of the panel of lights. The engineer’s shop was a very happy place, particularly on Friday afternoons. It was essentially an enclosed yard, with a large door leading to the brewery yard outside, and a small door leading to the supervisor’s office. To one side were racks of shelving that housed every little part that could ever be needed in a brewery operation. To the other, close to the yard door, was a huge anvil. This anvil could conceal several pint glasses beneath its imposing shape, and the area was affectionately known as The Anvil Arms.

Eventually, the brewery offered the brewery workers the option to get tokens rather than their daily four pint allowance. This had several advantages. Firstly, the vouchers could only be spent at the brewery shop and anything bought there could not be consumed on the premises (ha!), secondly, it prevented drunkenness at work, particularly amongst the draymen, and thirdly it allowed the scheme to be extended to office staff. Almost all of the brewery workers refused to give up their allowance, whilst the office staff welcomed their new-found source of free alcohol. However, when one or two of the wives of the brewery workers found out, they insisted. Eventually, there was just one guy, who had a labour-intensive job in very high temperatures, that continued to get the allowance. Interestingly, he rarely consumed all of his allowance, and after a week there would usually be about a gallon of Mild left. It somehow always found its way to The Anvil Arms. The proliferation of vouchers supplemented this with Barley Wine and the occasional lager. So, Fridays at The Anvil consisted of several pints of either Carlsberg, or a heady brew of Mild and Barley Wine. The yard door was heavy and noisy, so whenever it moved there was a plenty of time to hide glasses and cans beneath the anvil. The engineers, and invited guests, all had good reasons to be sat around the anvil. I now had the schematic diagram and the copy of the panel of lights as my excuse. Occasionally Fridays became Thursdays too, and during holiday seasons it could last a whole week!

In the mid 1980s there was great excitement when the brewery invested in a number of PCs. The word processing software could be put on them, and they could be programmed too. My job was simply to get to understand them. The one on my desk was enormous. It took about ten minutes to boot up, and when it was ready it just said A:

That was it. The rest of the screen was blank. We had to put floppy disks in to get anything out of it. These were 5 ¼ inch storage disks, the equivalent of today’s USB. They could hold 90k, or 113k if they were ‘double density’. My boss encouraged me to do whatever I could to familiarise myself with this new beast, including making use of the PC game Bruce Jenner’s Decathlon. The pole vault was the hardest discipline. and it is a good job there was a sturdy keyboard otherwise it would have been broken within a couple of days. How times change, storage devices are now measured by the gigabyte, and Bruce Jenner is called Caitlin. Can’t ever see that happening to Daley Thompson.

I had recently started a brewery cricket team, and I decided to teach myself the Basic programming language so that I could maintain the stats. I also used the word processing functionality to write match reports of our 20 over bashes at Offerton, and occasionally 40 over contests at Compstall, and soon the PC became my best friend. I was always on it, rarely to do anything connected with work. However, all good things must come to an end, and the brewery wanted enhanced productivity out of their PCs. They bought a version of COBOL, I think it was an early version of Microfocus COBOL, and gave me the challenge of developing a system for the architects’ department. This managed the maintenance and painting work at each and every pub, including materials, resource and progress. It was not too difficult, and proved to be just a minor distraction from my more serious efforts that were put into cricket statistics and match reports.

A chance meeting at a party changed the course of my coding forever. I met a recruitment agent who suggested that by going contracting I could at least double my money. When I told her that I worked on a Sperry Univac machine with the occasional IBM PC she gave me some good advice. ‘You need to get IBM Mainframe on your CV,’ which was a new one on me. I wasn’t one for keeping up to date with the latest industry trends, now the lure of vast fortunes meant that I would have to. So, I started looking. The friendly recruitment agent got me an interview with a well-known retailer in Manchester, and the interview was quite something else! A dour chap, who was the head of development, showed me his screen. That is our Assembler code. Do you understand it? That was about his only question. The code was a bit more structured than I was used to, but it was all very familiar, so I nodded. He then told me that they only used Assembler, none of that new-fangled COBOL! This was still 1989. He then walked me up and down the development area, where rows upon rows of desks were occupied by programmers with heads down in listings or staring at their screen. This is our working environment, and we expect people to work. We don’t allow newspapers or other things on desks. He was really selling it to me! Anyway, after a day or so the agent rang to tell me that I had got the job. I could put up with Assembler for long enough to get familiar with IBM, and I could stare at a screen like the best of them in their dark satanic mills. The brewery would be sad to see me go, and I would be sad to leave, but to be fair they realised that my ambitions had gone beyond invoicing systems and a few sneaky beers! So, after eleven and a half years I was about to start my second job.