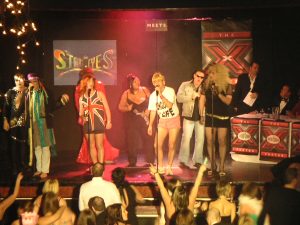 New century, new start. Or in my case, not so new as I returned to familiar ground in the centre of Manchester…

Agencies can be a rare and strange breed. Even when you decide that you want to switch contracts they rarely help you, its almost as if they are in denial. This appeared to be the case for my move back to Manchester, even though I handed the opportunity to them on a plate. Anyway, they reluctantly stepped up to that plate, and I managed to negotiate myself a good deal whereby the agent got me the initial contact (many of my previous colleagues had moved on), and I would allow them twelve months of margin. After that it was adieu!

The new landscape was quite different. My first role was to make some VAT changes that were a bit too simple. What had I let myself in for? Next up, however, was a real challenge. The fashion retailer had an innovative recruitment policy in place whereby they took a number of graduates and youthful internal staff, and trained them in everything mainframe. Quite often they were let loose on the systems before they were really ready, such was the demand for resource. I was appointed as technical lead on an Order Building project, replacing a paper driven system with automation, enhancing the already crowded customer services journey. I had a number of enthusiastic youngsters on the team, a non-technical project manager, and it was great fun. The new IT Director loved to encourage the youth, inventing all manner of games and challenges to grow their careers and their personalities. Whilst I was considerably older, I could drink beer and eat curry with the best of them. The order building project went in as a great success.

The Development Manager came over to explain to the team how wonderful it was to see such tangible results having an effect on the contact centre. Automation led to increased add-on sales, and an estimated £7m on the bottom line. I received huge praise, and rightly so, but really the younger element in the team had done the hard work, I just smoothed the way when some particularly obstinate business analysts threatened to derail us!

Two more non-IT related events occurred during this period. First of all, the IT Director had a pool table installed with the ambitious aim of encouraging collaboration and getting people to interact with those that they would normally steer clear of (IT can be like that!) After a very short period of time it was moved from the space next to the Operations Support Manager’s desk, as he didn’t like being distracted by the regular crashing of balls. Its new home, in between project managers, developers and analysts, was much more acceptable, though there was the inevitable abuse. Project meetings were more about angles and the collision of spheres, and at one time there was a queue to play just like in the pub. This generally happened mid-afternoon, and the queue could quite often extend beyond the finishing time. The desired departmental chemistry was not quite evident, so the director created a pool competition. That way, people were bound to meet new people. Just to make it interesting I ran a Tote style betting pool on the side, fully sanctioned and positively encouraged by the director, who inevitably, and disastrously, bet on himself. I don’t think anyone checked the company handbook about gambling, and they certainly didn’t include any stipulations in my contract! As the tournament progressed the crowds around the table grew, with the old school mainframers tutting loudly about the scandalous waste of time and resource. It made no difference, the pool table lasted several years, several competitions, and several gambling sidelines.

The other event was a pantomime. No, really! This began as an IT only Christmas party, but quickly progressed to company wide entertainment. By this time there were a number of graduate intakes, and we had stumbled upon a regular Friday lunchtime gathering at various pubs. The idea of the pantomime was mooted by management at one of these gatherings, and several of us signed up. The first thing we did was to rewrite the somewhat twee and 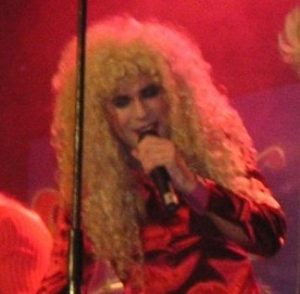 unfunny script. It became more of a Carry On film than a panto, oh no it didn’t! Rehearsals were held during office hours (including for contractors!), and on the day of the Christmas party we were given the day off to get ready for the show, all on full pay! It was at an hotel, and beers flowed as soon as the bar opened. The evening was a bit of a blur, a few people stepped over the line with words that should definitely not be heard in a panto, but the audience loved it. The following year the panto became a Stars In Your Eyes meets X-Factor show, a much grander affair that involved the whole company. We started as Bucks Fizz, and I have never heard a louder scream than when the two boys ripped the skirts off the two girls, even though the two girls were actually me and my mate! We then became a supergroup, featuring me as Boy George, singing Do They Know Its Christmas, and we were eventually joined on stage for a huge finale by Elton John, Bruce Springsteen and various other ‘celebrities’. Other shows followed, it was a time of great humour, fun and games, and a few practical jokes. 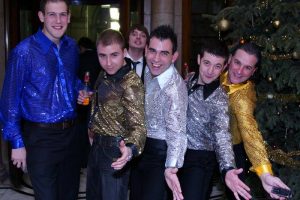 I won a trip to the World Cup in Japan, but I was extremely suspicious that the person who rang me up to tell me was just one of my colleagues. You can read more about that here…

Of course, I was still being paid as a contract software developer, so I had to at least try to fit in some IT along the way. This came in the form of a rewrite of the warehouse sortation suite. The old suite was doing just fine, it had not been touched since its inception. However, the process had changed. The primary sorter had gone, and there were a few more parameters that needed to be considered. Location, weight, dimension, singles separate from multis, time, type of delivery, maximum run time, etc. It was one hell of a matrix, and it would be one hell of a testing effort.

At the time I was having trouble with my knee, so I went in to hospital to have it seen to. I would be hobbling for a few days, but after that I would be fine. When I came round from the anaesthetic I was told I could go home when the physio had been through the use of crutches with me. I wondered why, and the nurse explained that they had repaired a hole in my cartilage, it was very delicate, and I would be non-weight bearing for several weeks. Fortunately the fashion retailer took the enlightened view of sending a laptop to my house. I worked from there designing and coding the new sortation system, emailing with progress updates. My plan was that I would keep any mainframe dependencies to a minimum. I coded it in Microfocus COBOL, tested it locally, and when I was ready to move it I uploaded it to the mainframe and tested it there. My Identification and Environment Divisions were copybooks, and I had to change one line of directives. Other than that the programs were identical, and so were the results.

By the time I got back to the office in Manchester, and subsequently the warehouse at Shaw, it was a great success. I wrote a series of reports to demonstrate the split of parcels, and that’s when we found a flaw. The warehouse distribution manager didn’t like the split, though all of his rules had been followed. I sat with him and we worked in a very Agile way, switching rules about until our jagged line was smoothed out. The beauty of running in seconds on the PC, making a quick change and rerunning, was evident throughout. When it went in to production there was hardly a risk, and it proved to be a phenomenal success for years. Development could be done on the mainframe or the PC, whichever was most convenient. The DB2 mainframe files, when extracted, were very similar in structure to the Microfocus COBOL files, all of which were copied to flat files for speed, simplicity and efficiency. I could upload or download all of the files and the suite of nine programs in seconds. I documented my approach along with instructions on how to manage the PC / Mainframe transitions, and gave strict instructions that no-one should touch the dongle on the back of the PC.

I was writing great code, playing pool, managing a betting operation, performing on stage, and having a great time. So, as George Best was once asked, where did it all go wrong?

The simple answer is, it didn’t! IR35 came along, and by this time I had been back at the fashion retailer for four years. They were getting twitchy too, having one of their regular contractor culls. The IT Director was full of regret, and he offered me a permanent position. My COBOL skills were still in demand in the marketplace, but so were my performance skills at Christmas parties! I had a decision to make, should I go back out into the wide world of contracting, or accept a permanent role for the first time in eleven years?